For a little while, I've been hanging out and playing Dominion (and thinking about trying other games) on BrettSpielWelt, a nice German online-boardgames site.

It is definitely a different, and inferior, experience to playing these sorts of games face to face.
Faster setup and teardown is wonderful, but is met with the problems of network issues, players mysteriously dropping, a pace that is too fast, lack of trash talk, and turning it into a pure mechanical and mathematical exercise.

But what I came here to say about it was:
I've never played the Dominion Alchemy expansion before; I've got it on order, to arrive along with my preorder of Prosperity.
I have heard that the game is "best" with 3 to 5 cards from Alchemy or none at all.
However, in my experience on BSW with "all random", at least purely mechanically, it doesn't seem too disruptive to have just 1 or 2 Alchemy cards in the mix.
When you normally play Dominion, there are typically a couple of cards in the Supply that just don't get bought anyway.. and this doesn't seem to grossly affect that. And it still gives you an option; sometimes just Golem in the supply is worth buying a few Potions, or whatever. It really depends on the environment.
(Also, I've had my good 4-cost cards Swindled into Potions countless times; that's really obnoxious.)

So, I think I will favor "all-random", or at least "not artificially affecting the number of Alchemy cards in the Supply", when I end up owning this expansion, and we'll see how it goes.
Adding both Alchemy and Prosperity to the card universe at the same time is going to lead to a lot sparser distribution of cards from any particular set anyway.

Posted to rec.games.trading-cards.jyhad this morning:
I have not posted a formal, general, thanks to this thread yet, other than
in specific reply to LSJ.
I just want to say a few things:
First, yes, thank you to Oscar for trying to keep his favorite game (no, not
Racer Knights) alive in the corporate eyes. And for all of his dedication
to the game from long before he was getting a paycheck from WWCCP.
Thank you to LSJ, for taking on the task of not only *design* for this game,
but in-place redesign, in order to manage balance issues while keeping nearly
every card ever printed tournamet-legal. And for tolerating Stupid Questions
(which show no sign of stopping).
Thank you to those who keep the VEKN running on a volunteer basis.
Thank you to Prescott Jenner, for pulling me in to the Boston VTES Group back
in 2001 in response to some of my early Stupid Questions on the newsgroup.
And to many people named Ben, Matt, Kevin, Chris, or John (ok, there are more
names than that, but this covers a lot of people) who have been at Boston
VTES with me for the last 10 years.
Thank you to the international community of VTES players who have always
been welcoming, generally friendly, and often entertaining.
But all those thankyous being said, "Ceasing Production" does not mean the
game is over.
The only thing that is stopping here is the physical and legal printing of
new cards.
There are thousands of cards; thousands of potential decks (both Josh-esque
and Tier 1), which haven't even been thought of yet.
Other than, perhaps, Poor Group 6, a hiatus from getting new cards printed
would actually be beneficial to people's creative juices. And, seeing
current circumstances as they are, maybe there will be Final Official Errata
turning all the G6 vampires into G5, I dunno. Why not?
The VEKN is pretty much entirely player-run.
The game design has always been influenced by the players, and "fan
expansions" are totally not out of the question.
The game is still fun.
And, if all else fails, it is about the community.
VTES players love to play games. VTES players are *good* at games in
ways that non-VTES players are not, drawing on the skills unique to this
game. Play your BSG and your Chaos in the Old World and your Dominion with
other VTES players, and you'll have just as rewarding of an experience.
I say don't raise up your torches and pitchforks against CCP and WotC and
RSD over all of this. Continue to play the game, continue to play games
with your VTES mates, and see if you even notice the Cessation Of Production
in the next several months.
Thanks for reading.
Josh "Jozxyqk" Feuerstein
Former Prince of Boston
Asker of Silly Questions
MSPainter of Silly Art
Player of Games
Posted by Ossian at 7:11 AM No comments:

If you're reading this, you probably know the news. V:TES is Ceasing Production (again).
I've been playing the game since early 2001, and will continue to play it until there aren't 3 other people to play with anymore.
As much as this wasn't unexpected, it's still significant.
I will spare you most of the history lesson; most of my personal history with VTES was already written down in my eulogy for Your Move Games anyway
I've met so many cool people through VTES, I'm happy that this news doesn't break those connections.
And the thing about VTES players is, they're very good at the types of games I like to play. Being sneaky, calculating and secretive, has become a part of so many newer games.. Glad that I can still pull from that pool of folks.
The game won't evaporate; it has lived without corporate sponsorship before, and it will do it again; so I don't think I'm going to blather on much more.
I'm just glad that my artwork managed to get onto a card before the game died.
But I do know someone who's sad: 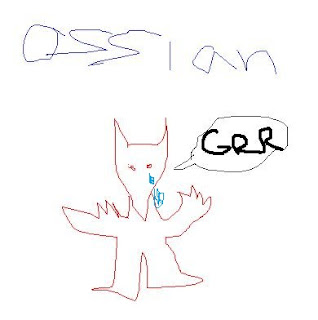 Posted by Ossian at 4:13 PM No comments:

With money gained from some recent VTES ebay auctions, I have put in an order to Thoughthammer (because I've heard of them and because they take paypal) for a couple of things: Dominion Prosperity, Dominion Alchemy (which I wouldn't have bought right now if it weren't "free"), and Small World Tales and Legends (which I wouldn't have bought without an official online FAQ if it weren't "free").

So, perhaps Small World will go back into "the rotation" for a while -- they've got another expansion (or two?) coming before the end of the year, which more ebay funds might go towards.

None of this is going to get shipped until TH has Prosperity in stock, but that should be within the next few weeks and maybe I'll have another excuse to do EliCon 2...


Of course there are still a bunch of other games I wouldn't mind getting in this "effectively for free" category:
Pandemic's popularity may have been vaccinated (har har!), but Talita might enjoy playing it 2p with me..
There's always Pegasus..
Betrayal at House on the Hill's re-issue is on my radar..
Defenders of the Realm is, sort of -- a co-op game with "a winner" but no Traitor.
I could go on, but the more important stuff is about what I *did* buy, not what I *might*...
Posted by Ossian at 1:21 PM No comments: