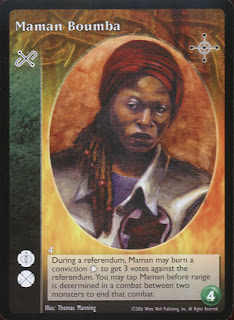 Maman serves as both combat defense (that you can sell around the table) and vote defense (5 un-cancelable votes against a referendum) EDIT: and minor bleed defense (reduce by 1), even here.
The Angels of Berlin allow you to use her end-combat ability multiple times per turn, which incidentally also works while she's sitting in the incapacitated region.
You can take the occasional "bleed for 2 at 1 stealth" action with her, but that's really not her primary function.
If you want, you can drop a Secure Haven on her to protect her from Pillowface actions, but that's purely optional; in a deck that needs her, you're likely to be using Secure Havens anyway, and you'll want to put them on your big vampires.
Posted by Ossian at 9:19 AM