Still more scattered disorganized thoughts, nothing as "insightful" as my comments on RDX yet.
And also trying to avoid deep spoilers since I'm even seeing the episode a week before many people actually in the UK, and certainly quite awhile before most Americans.

As a followup to Twentica, we now have kind of a baseline to judge the setting of RDXI.
Once again, things are slightly different than in previous seasons and unlikely to be directly explained.

This episode spent a lot more time on ship, even with a classic Rimmer/Lister bunkbed scene with familiar decorations from the past throughout.
The opening scene called back to Meltdown, with Rimmer's Risk story, but this time with Lister and Rimmer playing a game "Mine-opoly". Stuff happened in the game where there was a missed reference to the Luck Virus, which was certainly my first impression.

The overall plot was jarring at first, but it made a reference to another episode with similar sci-fi-explanation and after thinking about it, fine. That's OK.

The jokes were at par, although it still seems like the things that make Cat a Cat and the things that make Rimmer a Hologram have taken a back seat for the sake of the jokes.
For one thing, Cat makes references to things in Earth's past as if he grew up with them, and seems to just be "the human with the mind of a 3-year-old and sharp teeth" for the most part.
(Yes, one of the jokes is that he gets things completely wrong, but he still gets them wrong within the frame of reference of being human, if that makes any sense at all).
I really hope they do something with the "Cat episode" (I think it's episode 6) to call back to Cat being a Cat and even moreso to the Cat Religion and Cloister.

Rimmer is definitely still "dead", "electronic", and "a hologram", but he's been in Hard Light Mode through the whole last few series, which takes a bit away from him being non-human except when they specifically call attention to it. Even in the beginning of Twentica, they make reference to someone possibly "stealing his DNA" where they could have made reference to a digital copy (a la Me2), for example.

In context of this series, and the specific reference they *did* make to a past episode (with Kryten miraculously knowing all the facts about something he could have mentioned 30 years ago.. ;) ), this one was OK. It's still hard to judge until I see more. RDX was really trying to do more character-development stuff, while XI so far is "these characters we already know, in new situations", mostly. Not bad on its own, just hard to review in the way I think about the series.

As a side note, today I also watched 2 older episodes with my son: Backwards and White Hole.
Like I mentioned last week, Backwards and Twentica had a similar structure, but Backwards still did its thing way better, in my opinion.
In White Hole, Lister makes a little speech to how reliant humans are on technology, and he coincidentally made a similar speech at the end of Twentica... His White Hole speech was a little bit more "sincere", but the Twentica angle was all for the punchline.
Also, White Hole opens with the resurrecting of Talkie Toaster, who had been severely disassembled by Lister... which is definitely a reference missed in Twentica as well.

These thoughts were supposed to be quick, but I'll be back next week to try and tie things together a little more tightly.
So far, I think the series is still about on the same level with RDX all-things-told, and still outranking Series 8 in almost every way imaginable...

Posted by Ossian at 9:07 PM No comments:

I really will need to let Red Dwarf XI sink in a bit, and I think this first episode "Twentica" is hard to review.

I did manage to watch it this evening, on my TV screen, via a far-less-convoluted-than-expected use of a VPN service, an Android app, and an MHL cable.

Comedy-wise, I think the episode was about on par with Series X. They're kind of easing back into it.

Plotwise, it was really similar to Backwards, in a way, although not nearly as clever of a premise. But in the same way as Backwards wasn't quite consistent with what "the universe is backwards" actually meant, the premise of this world they traveled to was just a bunch of setups for mismatched jokes.
That is not really a criticism though, because it goes back to the roots of it being a sitcom first, sci-fi second.

Still, a fairly contrived way to have a larger cast of "humans" than the 4 of them.
And they (likely deliberately) avoided any attempt at trying to deal with continuity. We may still never know what "actually happened" after Series 8.
Also, the crew seemed much more comfortable with technobabble, and less surprised by "whirly things in space", but then again, they've been together for hundreds of in-universe years, or at least 30, and they've seen it all.

In 2012 when I was going through Series X I picked up on a lot of subtleties (some of which weren't actually there, but I willed them into existence), and did some overanalysis. This is just a harder episode for that. Series X started out with Trojan and Fathers and Suns, which were "character pieces" while this one was a "situation piece", more like the Lemons episode.
So I'm reserving my overanalysis for a little later.

But all other things being equal? This episode wasn't terrible.  Hard to give it a number of Rs on the good old GRR scale, but let's start out with a solid 3.

GRRR for Twentica.
(subject to change in retrospect)

Posted by Ossian at 8:46 PM No comments: 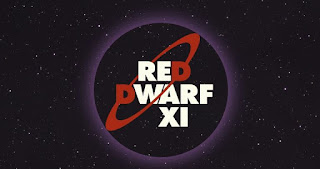 Posted by Ossian at 9:50 AM No comments: