(Warning: minor spoilers ahead)
On Wednesday, December 7th, 2011, a group of 5 brave factions began to shape Earth #6730
We played the first 2 games of Risk Legacy with my set, and here's a brief report on how it broke down:
First, the first 5 of us all signed the board: 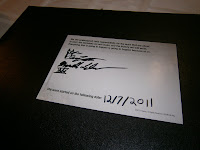 Then we chose our factions, along with the special ability that would accompany this faction forever:
Max chose the Saharan Republic, giving them the ability to Maneuver in the middle of their turn.
I chose the Enclave of the Bear, choosing the ability to obliterate a country when rolling triples and defeating at least one defender.
Tree took Imperial Balkania, with the ability to round up instead of down when recruiting troops.
Shaun took Khan Industries, with the ability to spawn an extra troop in each of his HQs each turn.
Finally, Kevin chose Die Mechaniker, whose starting HQ will always be fortified when defending.
Some joy was taken in ripping up the unused special ability stickers: 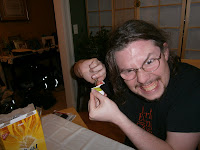 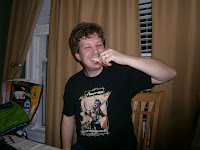 To choose the initial extra coinage on territories, we chose randomly: 8 territories with $1 extra, and 2 territories with $2 extra. I won't give an entire list here, but Europe definitely seemed to be strongly represented by this randomness.
The first game played a lot like Risk (!). Except that, instead of being a race for cards, it was actually won by a blitz that took 2 HQs.
Throughout the first game, all 5 of us laid down our Scars, starting with this one in Greenland (note that we placed this first sticker incorrectly -- completely covering the X instead of beneath it --but we'll live): 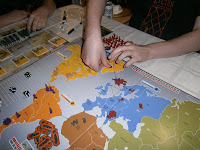 More shots from later in the game: 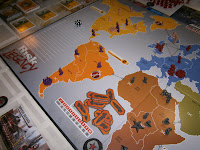 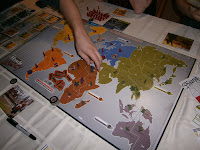 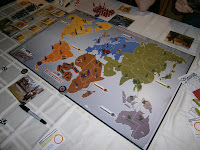 In the end of Game 1, it was Tree and his Balkanians that reigned Triumphant, settling in their new city of DunTree: 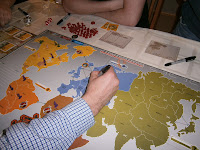 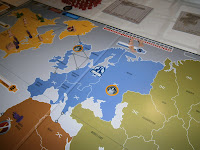 3 other minor cities were founded (including my contribution, "Nilbog" in Venezuela), and one territory gained an extra coin.
The second game went much more quickly, now that we understood the flow of the rules and such. Also, since we had all played our Scars in the first game, there was only one left in the box which meant nobody gets any.
We ended up taking the same factions, coincidentally, although we started in very different areas.
I started the Enclave of the Bear in Central America, and Shaun started in South America and decided to bunch up most of his troops in Venezuela.
Due to my special ability, and my general strategies in such games, I decided to try and wipe him out on Turn 1.
Unfortunately, that would not be the case.
Long story short, with "help" from Max, my faction ended up being Eliminated from the game.
WARNING: This is where there may be actual spoilers
We opened up the "Eliminated Player" packet: 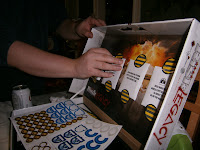 .. unlocking Comeback Powers, and now the Enclave of the Bear is "Stealthy". 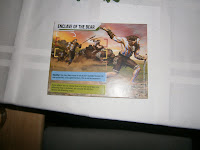 We also unlocked the Mercenary Scars. If our next game is with 3 or 4 players, then they'll see play; otherwise they'll have to wait, with only 4 Scars available.
Kevin founded his Major City of Mordor, and a few more Minor Cities were founded (although I wasn't able to do anything at endgame, other than take a look at my spiffy new power).
And thus ended Game 2.
Game 3 might happen this Wednesday, I hope for a quicker turnaround time on a session report...
Posted by Ossian at 11:45 AM