Another TempleCon has come and gone, and I had a GRReat time.

Moving to August, in my opinion, was worth the extra 6 month gap.
I know it wasn't perfect for some groups (there was a distinct lack of Diplomacy Tournament and a shortage of War Machine), and the vendors overall didn't seem happy with the outdoor tent, but for me it was awesome.
No giant snow banks in the parking lot, no concern about driving to/from the con in a Noreaster, no need to run back to your room to get your coat every time you stepped outside, an easy walk to Dunkin in the morning, and also easier to schedule the time off which is no small thing.

This TempleCon was also different from all other TempleCons because it was the very first time I didn't play a single game of VTES! Quite possibly the very first con I ever attended at all since I discovered the game where I didn't play. Even at my first-and-only trip to DragonCon, when I hadn't been integrated into the "Boston Group" yet, I still have photographic evidence of meeting the crew and being the newbie.

But getting to see the old VTES crew and just hang out and eat and drink with them, and play Other Games, is something I always look forward to.

I got a chance to play so many games. I tried to write everything down; I think this is a complete list:

Imperial Settlers
Dead of Winter
Suburbia
Velociraptor Cannibalism
Rick and Morty: Total Rickall (I still have to watch that show)
Graverobbers from Outer Space
Mansions of Madness 2nd Edition (exceeded expectations, but probably out of my price-to-realistic-plays ratio budget)
Lords of Waterdeep
Above and Below
Legendary Encounters: Alien
Bottom of the 9th
The Grizzled
Tiny Epic Galaxies
Terra Mystica

...and honorable mention to Sushi Go, which I just played with my son before bed.

Also spent my fair share of time in the awesome "arcade", playing a whole lot of games like Dig Dug, Tapper, a bit of Galaxian... 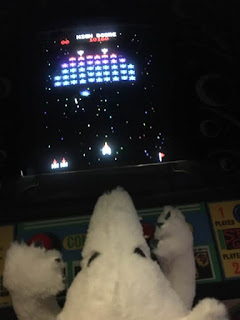 And for my first time, a Scotch Seminar.  Booze-illiterate as I am, I did learn a little bit there.
(Most important lesson: Apparently the term "peaty" translates to "OH MY GOD THE BURNING!" Not a fan.)

The vendors..
I was happy to see artist Heather Kreiter, who shares a bond with me over Ossian (from a conversation that did happen at an early TempleCon), and I bought a "Corpsey Puff" My Little Demon from her for my son (which he loved).
I didn't buy much else; just really the new Smash Up expansion so I could get it into my copy for the game library. I considered giving my ~$100 to the guy with the 3d-scanner to make a mini of myself, but resisted.

As is my way in life, I opened up the game room each day as early as made sense, did my library work, and caught up with that crowd that I really only see at the Con.  I enjoyed watching people play games as much as playing (and ironically I can't understand why kids enjoy youtube videos of other people playing Minecraft).
The real fun-winner of the weekend (which I didn't get to play myself) seemed to be "Chopstick Dexterity MegaChallenge 3000", which speaks for itself. BoardGameGeek says this is a 10-year-old game, I had no idea.  But everyone was using chopsticks to compete over food-shaped meeples in a bowl and it got pretty intense. Especially after the booze kicked in. :)

And then there was the wedding in the game room... Surreal, but not the strangest thing that could happen :)

Can't wait for next year!
And hope to keep up the gaming momentum until then...